Elevation, climate, and availability of food and water usually determine which animals you'll see where. In Bryce Canyon National Park alone there are 59 identified species of mammals dwelling in three very different climatic zones. Most of the lower elevation wildlife, such as kangaroo rats, chipmunks, rabbits, squirrels, along with reptiles like lizards and snakes, have adapted to the desert climate. Utah Prairie Dog, jack rabbits and cottontails can be found in middle elevations, while larger, hardier mammals inhabit the higher elevations. 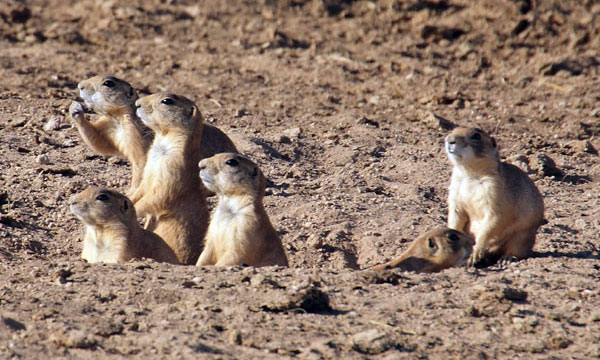 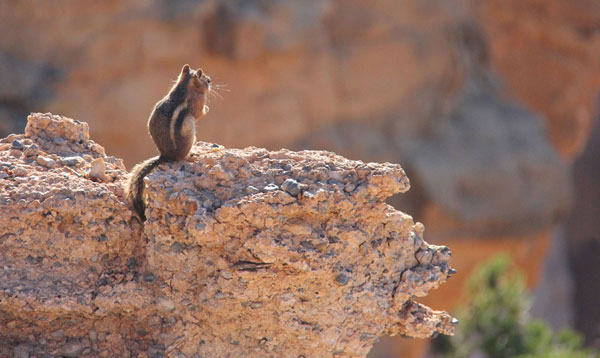 A chipmunk on a ledge at Bryce Point.

Also named for their tails, ringtail cats have long, bushy black and white tails. Ringtails are actually related to the raccoon, with very sharp claws and fox-like faces. They grow to about 30 inches long. These nocturnal creatures hide out in Bryce Canyon Country’s caves, only emerging after dark to hunt and raid campgrounds.

During the daytime, many small animals can be seen scampering along the Bryce Canyon amphitheater rim. At night, small rodents such as mice and gophers take their place. Small rodents are preyed on by other nocturnal small animals such as ringtail cats, badgers and skunks, and mid-size animals like foxes and coyote. Cottontail and jack rabbits are also at risk to mid-size predators. Porcupines, with their deadly quills, are less attractive to predators.

Wildlife watchers are most likely to see animals early in the day and then again at dusk. Some animals have become used to having people around, so you’re likely to see squirrels, chipmunks and similar small mammals scurrying around. Other small animals, such as rabbits, Utah Prairie Dogs, and porcupines are less often seen, so find a quiet spot, get your camera ready, and watch for wildlife. Wildlife watchers are encouraged to view all animals at a safe distance, and reminded to never feed wild animals.