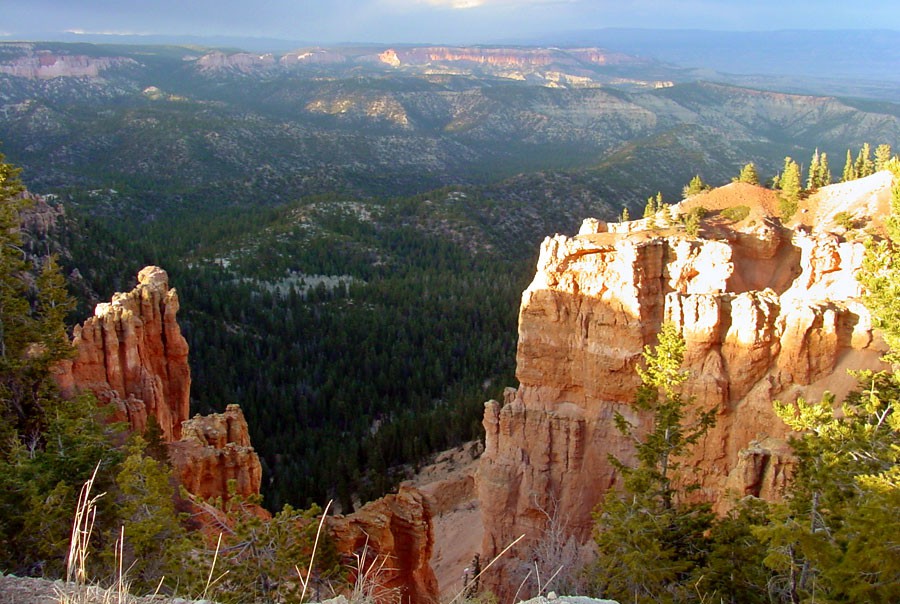 Looking north along the Bryce Canyon rim from the southern end of the park.

Many travelers visiting Bryce Canyon National Park never make it to the canyon’s top points. But Rainbow and Yovimpa view are not to be missed! Less than a mile from each other, these stunning vistas are well worth the 17 mile drive to the top! Not only are spectators able to sneak a breathtaking peak at the expanse of the entire National Park, the southern rim of the amphitheater, Grand Staircase-Escalante, and the National Monument from Rainbow Point, but on a clear day Arizona can be seen for more than 50 miles away from the rugged peak of Yovimpa Point. It’s truly a view from heaven. 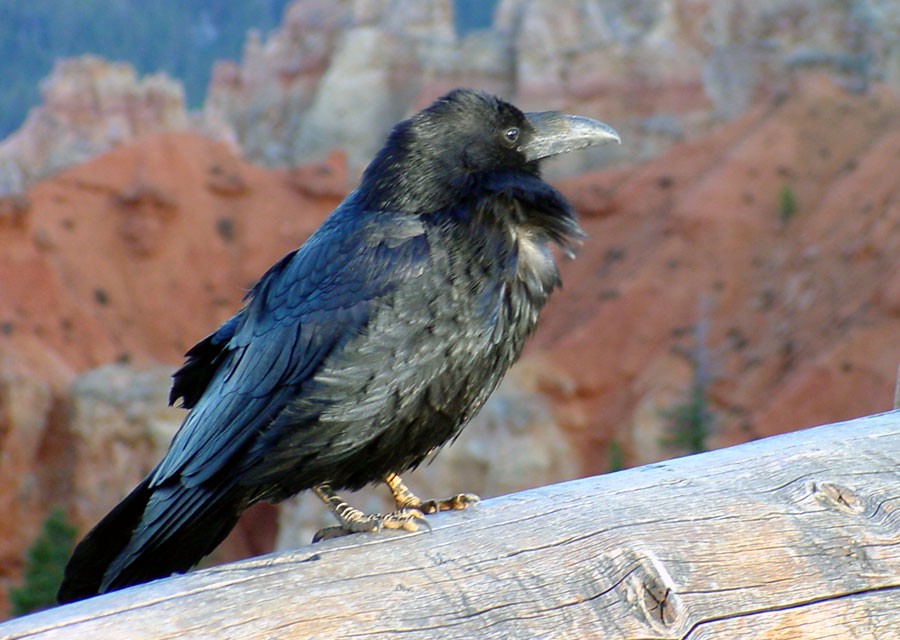 A raven rests at an overlook at the southern end of Bryce Canyon.

Enjoy a shady picnic from Yovimpa and take a hike between the two peaks on Bristlecone Loop Train, or challenge yourself to a strenuous 8 ½ mile uphill adventure on Spring Loop Trail, making your way past the tallest point in the park.

From Yovimpa Point travelers are standing on the top step of the staircase known as Pink Cliffs. The staggering shades of the Grey Cliffs are located just below, and in the distance the portion of the White Cliffs known as Molly’s Nipple can be seen. Near the downward distant horizon, a patch of Utah’s famous red rocks of Vermilion Cliffs is visible just under the hushed silence of White Cliffs. Under the towering Vermilion Cliffs and hidden just out of view are the dark secrets of the Chocolate Cliffs, while the lush tree-covered hills of the Kaibab Plateau trace the Northern Rim of the mysterious Grand Canyon. Yovimpa offers an unusual and contrasting perspective of this famous rock layer sequence and their many hues of color. 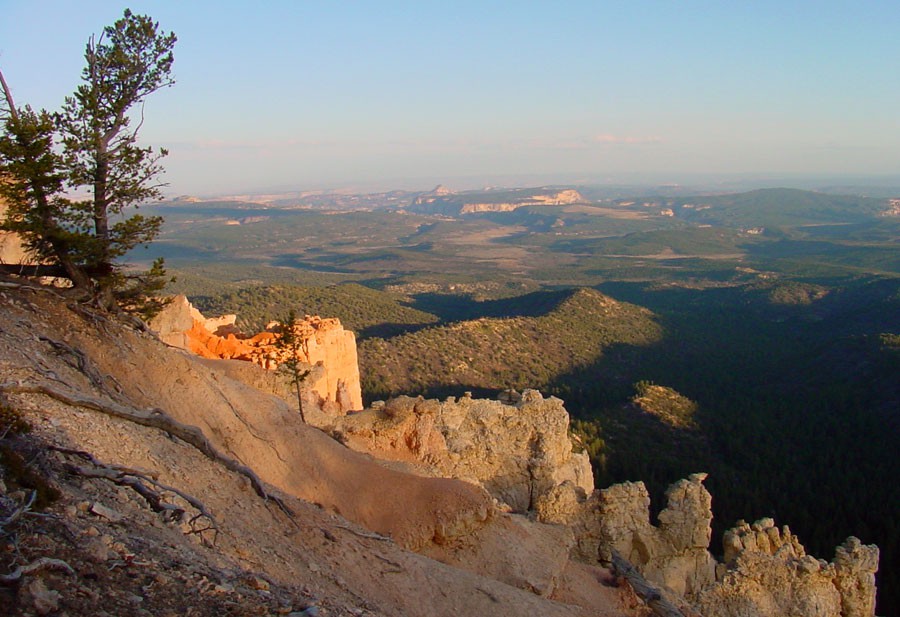 A view to the southeast from the southern end of Bryce Canyon National Park (elevation 9,000 feet).

The salty shadows of the Pink Cliffs are visible from the northward side of Rainbow Point. The small streams and tributaries of the Paria River moves along in the silence of the valley below, while the amphitheaters carved by the erosion sings its lonely echoes into the ghostly desert distance.

Nature As Rainbow and Yovimpa Points offer the highest elevation peak of the park, the surrounding travelers are dominated by the old world forest trees of White Fir, Douglas Fir, and Blue Spruce. Wildlife is brimming with a wide variety of squirrels and chipmunks, owls, woodpeckers and even the untamed grouse, while bird watches can catch of glimpse of the plentiful Steller’s Jay and Ravens in the area. 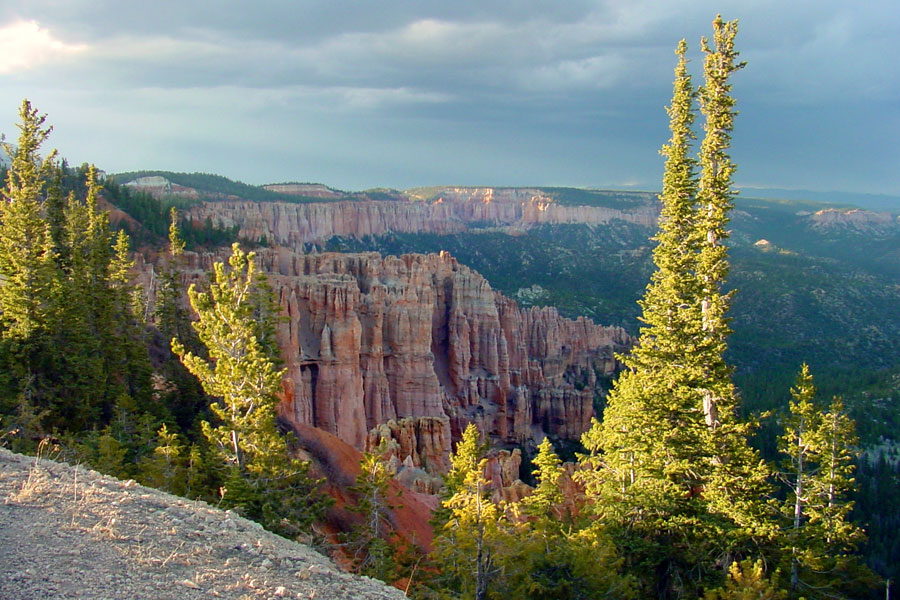 Another view to the north along the eastern rim of Bryce Canyon.

Trails For hikers seeking an adventurous plunge into the deep canyons of Yovimpa Point, the Riggs Spring Loop is a strenuous and exhilarating trek through the canyon’s many abandoned mysteries. Expect to complete a 7.5 mile loop between Rainbow and Yovimpa Points. For a longer journey into the canyon’s secrets, the Under-the-Rim trail stretches 23 miles, eventually returning to the canyon rim at Bryce Point Bristlecone Loop wanders through the forest at the highest area of the park. Here you will pass by Bristlecone Pines up to 1,800-years-old. This is a much easier 0.8 mile journey.

Click on the link (next) to view a map of Bryce Canyon (these two view points found at the southern end of the park).