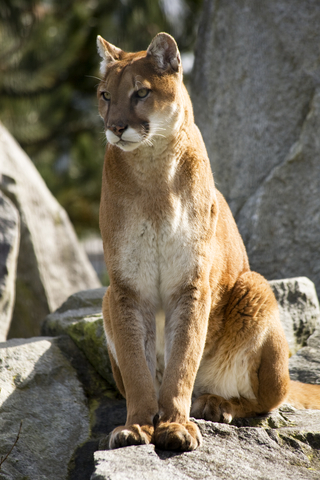 Mountain Lions are very prevalent in Utah and around the Bryce Canyon region, but are rarely seen.

The mountain lion is the largest member of the cat family in North America. These stealthy wild cats make their homes in the high mountains and rugged deserts of Bryce Canyon Country, but are rarely sighted. They can survive in a variety of habitats as long as they have adequate prey and cover for hunting. The mountain lion’s diet is carnivorous; deer is the preferred meal but anything from mice and squirrels to elk will do. They are ambush hunters, often hiding in dense vegetation and rock crevices and waiting patiently for prey. A mountain lion can consume up to 30 pounds of meat in a single meal, and will return to the same fallen prey for about a week.

A mountain lion can be as long as 8 feet from nose to tail, and weighs on average between 75 and 175 pounds. They are typically light brown with short, coarse fur, a white underbelly, and black-tipped tail. Highly developed vision is one of their greatest hunting tools, although they can’t see in complete darkness. Mountain lions have also adapted highly sensitive hearing, with the ability to detect hidden prey through high-frequency sounds. By comparison, they have a generally weak sense of smell. Mountain lions are also known as puma, cougar, and panther.

In southern Utah, a single mountain lion’s territory may range up to several hundred square miles. The rocky, craggy terrain and dense forests are the ideal hideout. They are solitary creatures, except during breeding, which can occur any time of year. Gestation is about three months, and mountain lion kittens are typically born with a spotted coat and blue eyes. Weighing about a pound at birth, these cats grow fast, weighing as much as 30 pounds in just two months.  Young mountain lions stay with mom for about 18 months, and are often in danger from dominant male cats.

Attacks on humans are rare as these cats are solitary and tend to avoid humans. Designed for stealth, with large, soft pads and retractable claws, these reclusive creatures move silently through backcountry. In Bryce Canyon National Park, the most common sightings are late night glimpses along the park road. Yet it’s not uncommon to discover mountain lion tracks, which look like round toe prints without claw marks. Circling vultures can also be indicative of a mountain lion’s territory and the location of their catch of the day.

Mountain lions are most active during the day. When hiking, stay in groups and keep children at the center; pets are more likely to attract a mountain lion than deter it. If you do encounter a mountain lion, maintain eye contact and don’t turn your back. Stand up straight to appear larger, wave arms, throw rocks and back away very slowly. Don’t run and don’t play dead. Fight back with whatever means possible. Report sightings immediately to forest rangers or the Division of Wildlife Resources.

Read more about wildlife in this region - here.