The Markagunt Plateau is one of the forested highlands that make up the High Plateaus section of the Colorado Plateau. The Markagunt covers about 800 square miles mostly within Dixie National Forest, including Cedar Breaks National Monument. The ski resort town of Brian Head is its highest point at 11,307 feet. The popular recreation area offers excellent hiking and mountain biking trails, skiing and snowmobiling, fishing and scenic byways. Markagunt was named for the Paiute word meaning “Highland of Trees.” 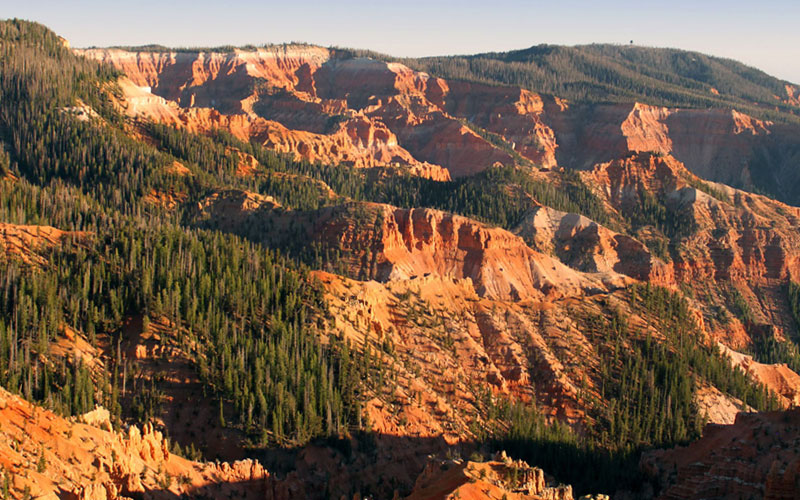 Cedar Breaks on the Markagunt Plateau

Volcanic activity on the eastern Markagunt Plateau began about 5 million years ago and continued until as recently as 1,000 years ago. Evidence of volcanic activity is scattered throughout the plateau. The Markagunt Plateau volcanic field, located east of Cedar Breaks National Monument, is a group of cinder cones and lava flows. The youngest cinder cones are located near Panguitch Lake in the north and Navajo Lake in the south. Navajo Lake was actually formed when a lava flow formed a dam at Duck Creek. Mammoth Cave, which formed 2,000 years ago and is located about 22 miles south of Panguitch Lake, is one of the largest lava tubes in Utah.

Some of the oldest volcanic activity on the Markagunt Plateau produced silica-rich trachytic, andesitic and rhyolitic lavas. Basaltic (or fluid) lava flows, which often erupt from volcanic fissures, indicate younger flows. Blocky, sparsely vegetated basaltic fields can be found at Miller Knoll, Cooper Knoll, Henry Peaks, Duck Creek, and the Black Rock Desert. The latter extends from Panguitch Lake to Miller Knoll, and is one of the youngest lava features on the plateau.