Escalante's namesake is one of its earliest visitors who passed through the region long before the community was actually established. When Franciscan missionary Silvestre Velez de Escalante was summoned to California in 1776 he carefully journaled his trip through the area now known as Escalante. Another famous expedition took place nearly a century later, when Captain James Andrus led the Southern Utah militia through the region during the Black Hawk Indian War in 1866. But it was Mormon pioneers who put this extremely remote community on the map in 1876. 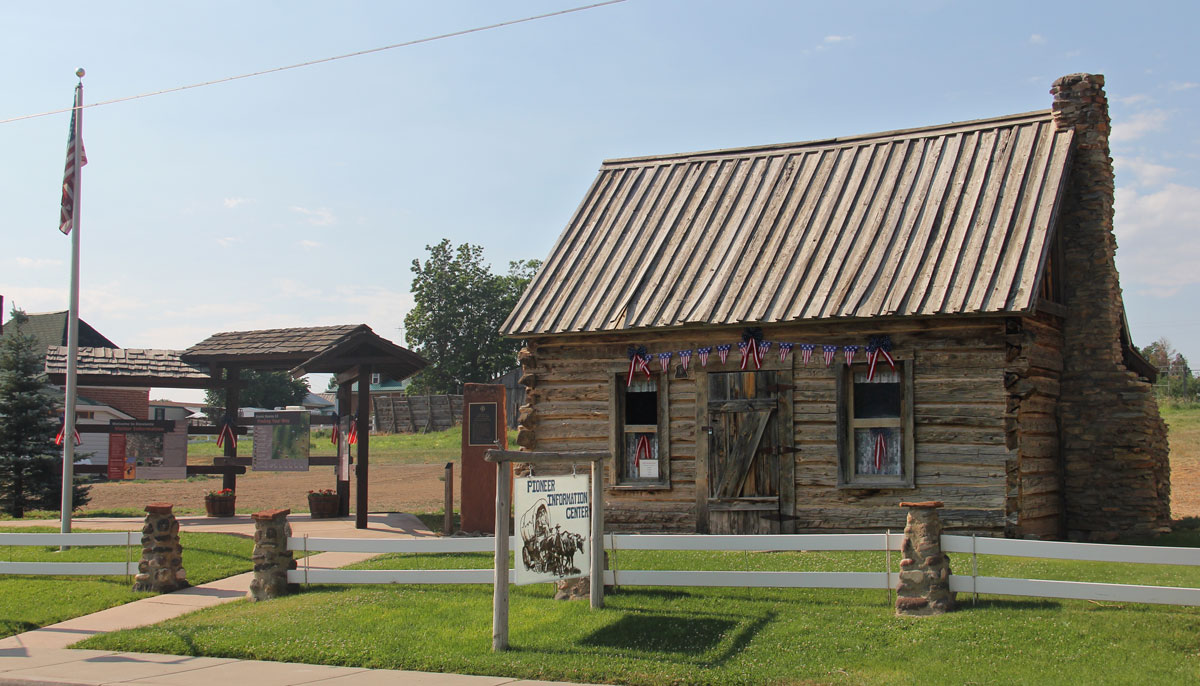 A historic cabin that is now used as an information center in Escalante, Utah

Escalante's settlers initially came from nearby Panguitch in 1875 to survey and stake out 20-acre parcels of land on a grid system. They met up with a group from one of John Wesley Powell's famous expeditions, who actually suggested the town's name. The pioneers returned in 1876 and broke ground on the first brick home, and about 95 of the sturdy homes and barns still stand today.  Learn more about Escalante, Utah - here. 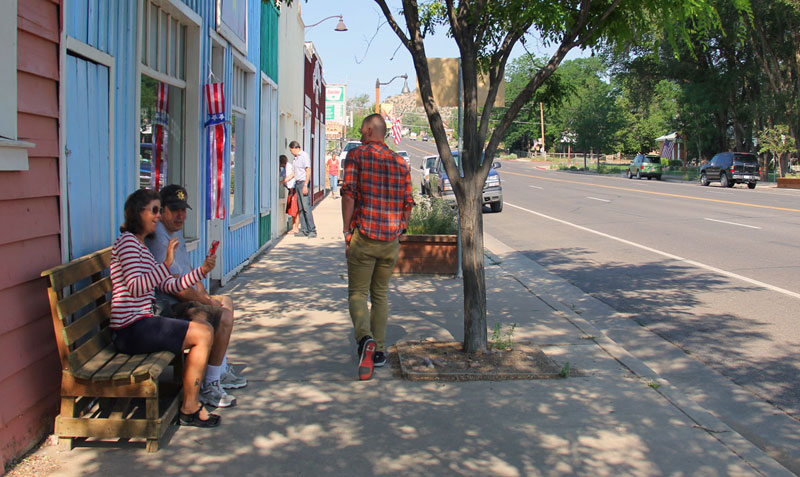 Escalante's early economy was driven by ranching, dairy farming, mining and logging, and the town thrived until the 1940s when the federal government's strict regulation of the surrounding public lands caused residents to leave in search of different opportunities. By the 1970s, Escalante's population of about 800 was roughly the same as it was when the town was established nearly 100 years earlier. 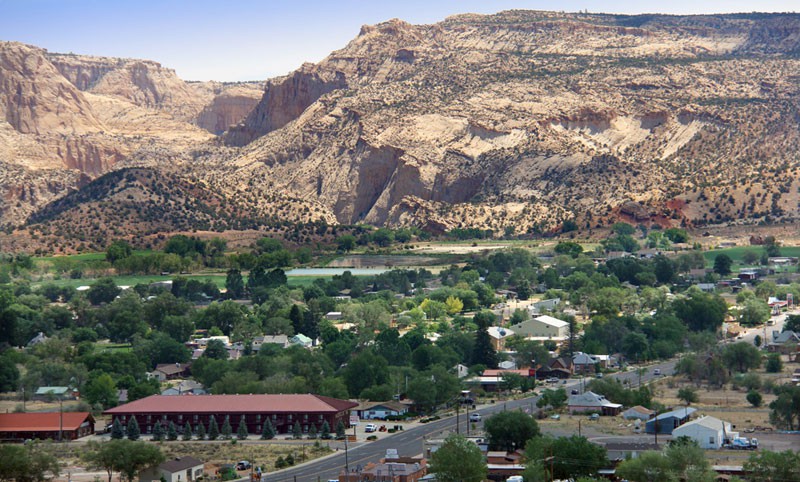 Looking across the town of Escalante toward the Escalante River canyon.

The establishment of the 1.9-million acre Grand Staircase-Escalante National Monument in 1996 revitalized Escalante with an influx of tourism, and today Escalante is one of the great jumping off points for adventure in Bryce Canyon Country. Estimates show more than half a million annual visitors to GSENM every year. At the heart of some of the most rugged and diverse landscape in the West, Escalante is centrally located along Scenic Byway 12.  When staying here, you'll have easy access to the Grand Staircase, Dixie National Forest, Bryce Canyon and Capitol Reef National Parks, Escalante Petrified Forest State Park, Devil's Garden, Lower Calf Creek Falls, and the infamous Hole-in-the-Rock Road. 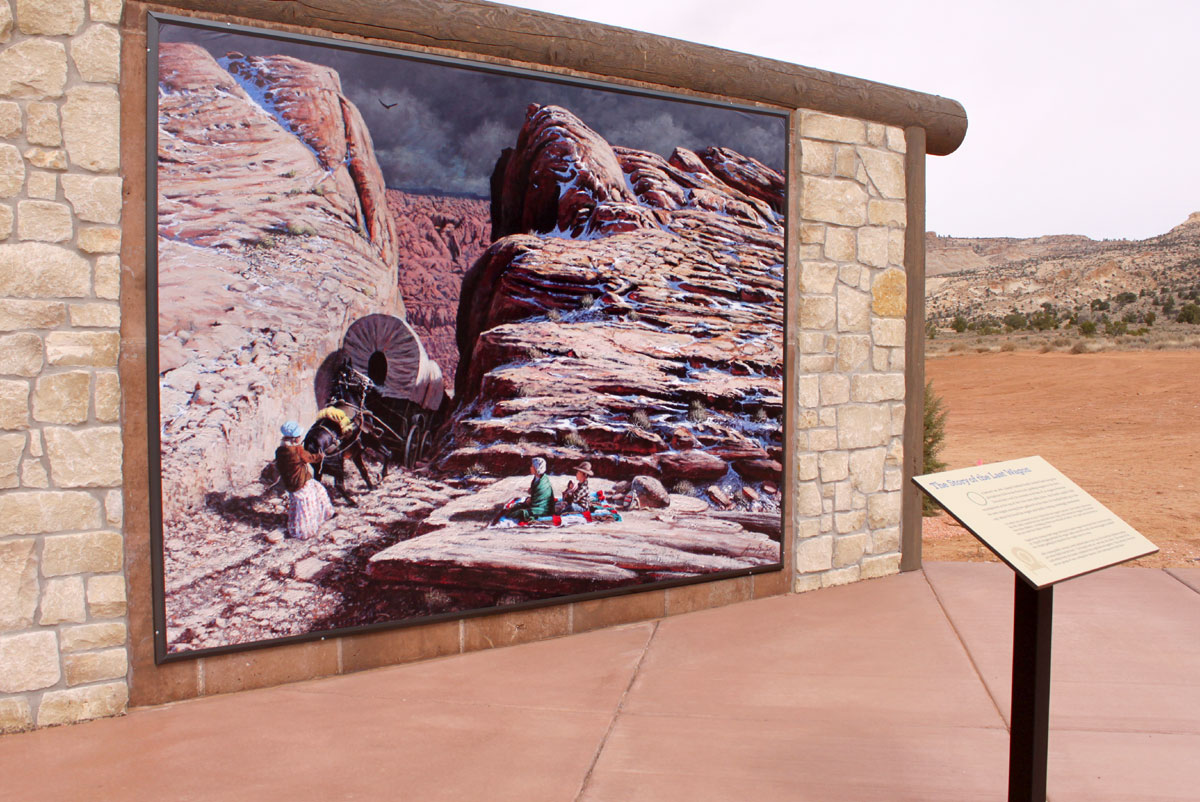 This mural portrays the wagons beginning their descent through the Hole In The Rock near Escalante, Utah

Hole-in-the-Rock Road leads to some of the coolest canyons in the region—Coyote, Peek-a-boo, and Spooky gulches, to name a few—but also has major historical significance. The legendary Hole-in-the-Rock expedition (officially the San Juan expedition) of December 1879 began when 80 wagons carrying 250 pioneers plus 1,000 head of livestock took off on what was supposed to be a six-week journey to establish a new southeastern Utah community. The treacherous expedition began about 40 miles from Escalante, and crossed southeast through some of Utah's most remote, rugged, unexplored territory along the Colorado River and then east along the San Juan River. Blasting through a narrow slot in the cliffs above the Colorado River was determined the only way through, followed by a raft ride across the river to carry the wagons, supplies, animals and people. To do this, the pioneers would need to blast and build a road through a 50-foot rock wall. They did this by dangling two coal miners over the Colorado River to drill holes and fill them with blasting powder! If you think that was intense, imagine the wagon descent. About 20 men would hold each wagon by rope as the animals struggled to pull the wagons through. Then they were ferried across the river, where they had to build another road before they even faced the arduous ascent. The grueling journey took six months to complete, through a bitter winter. Pioneers credited the settlers of Escalante with supplementing their food and supplies, making it possible to complete this seemingly impossible expedition. The nine-acre Escalante Hole-in-the-Rock Heritage Center on Scenic Byway 12 in Escalante commemorates the expedition. 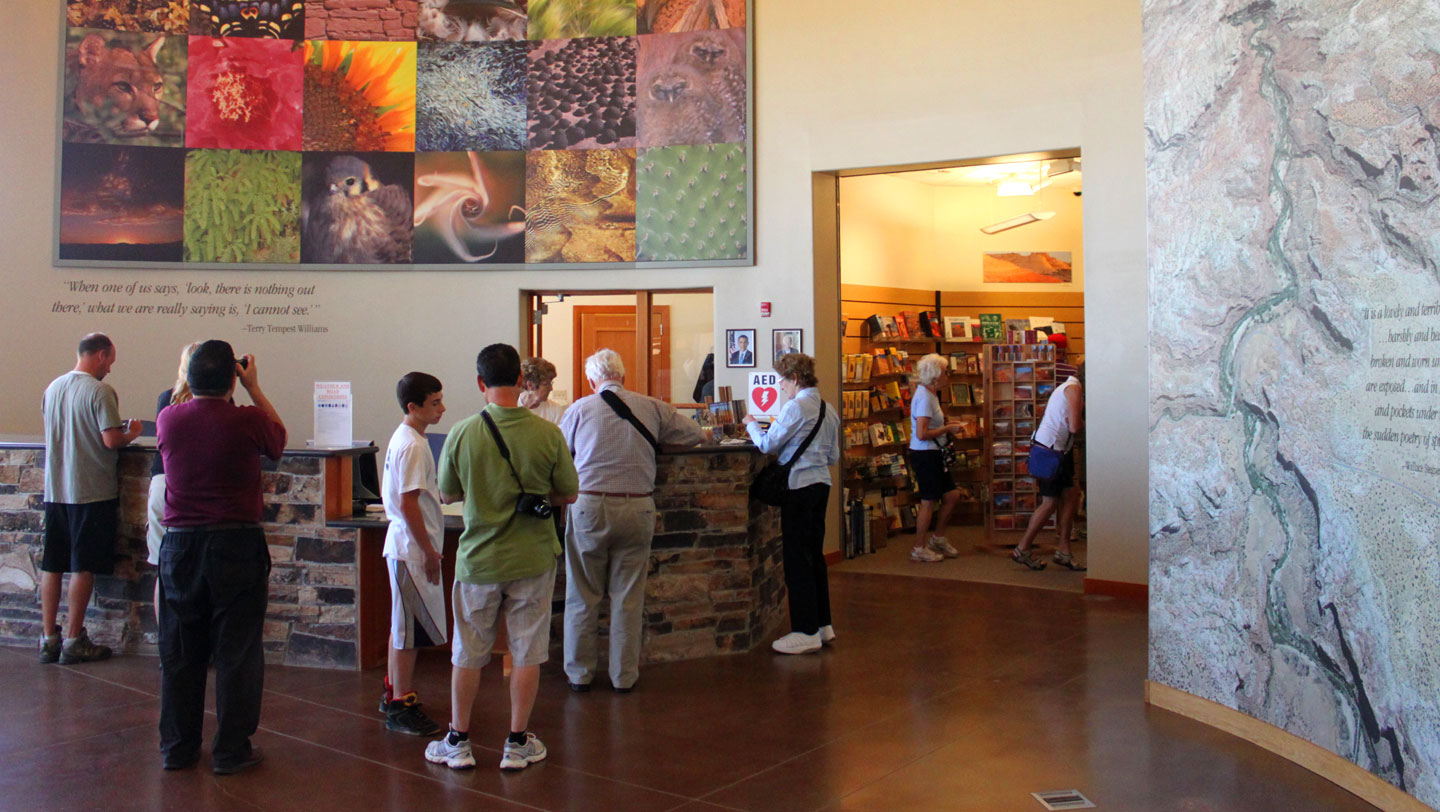 Visitors enjoy the interpretive displays and information available at the visitor center in Escalante, Utah.

There's something for everyone in Escalante including outdoor adventure, history, Native American culture, art galleries and the Escalante Canyons Art Festival, working cattle ranches and so much more. Escalante has a plethora of services, including lodging and camping, restaurants and grocery stores, gas and service stations, and the Escalante Interagency Visitor Center office.  Learn more about Escalante, Utah - here.