Escalante was one of the most remote towns in the U.S. when Everett Ruess arrived in November 1934. Riding in on a burro and leading another packed with his gear, the 20-year-old artist and poet from California had recently become captivated by the southern Utah red rock landscape. After a few days of bonding with the Escalante townspeople, Ruess headed out to Hole-in-the-Rock to "follow...the sweeping way of the wind." He was last seen a week later about 50 miles from Escalante, and then never heard from again. 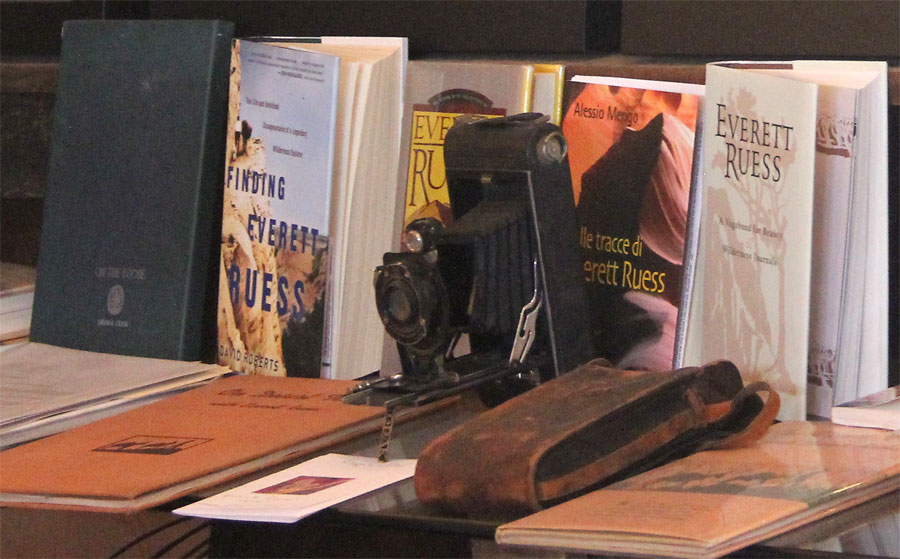 Artifact, books, and other materials from the life of Everett Ruess

Ruess had spent recent years developing a free-spirited communion with nature, exploring the redwoods of Yosemite and Sequoia National Parks, the High Sierras, the California coast, Arizona, New Mexico, Colorado, and southern Utah. He wrote to his brother, "I have not tired of the wilderness; rather I enjoy its beauty and the vagrant life I lead." Because of his wandering nature it was actually four months after his disappearance before anyone knew he was missing. A group of men from Escalante headed out on horseback to look for him, only to discover his burros confined near Davis Gulch, but no sign of Ruess—or his treasured art supplies and journals—to be found anywhere.

Artistic, poetic, and adventurous, Everett's wanderlust began at an early age as he moved frequently with his Unitarian minister father Christopher and mother Stella. His creative talents emerged at an early age. Before his mysterious disappearance in Davis Gulch, Ruess befriended and was mentored by other creative souls of his time, including painter Maynard Dixon, and photographers Ansel Adams, Edward Weston, and Dorthea Lange. His diverse body of creative works includes watercolor and oil paintings, sketches, woodcuts, linoleum prints, poetry, and other musings inspired by the wild, open, magical landscape of the Southwest, especially Utah's canyon country. Ruess wrote hundreds of letters and kept journals, which were published in two books after his death, On Desert Trails (1940) and Everett Ruess: Vagabond for Beauty (1983). His writings about Utah's remote wilderness—"I have seen almost more beauty than I can bear."—reveal his deep reverence for the rugged, wildly beautiful backcountry.

The mysterious disappearance of the young vagabond-artist has intrigued for nearly 80 years. Ruess has achieved near-cult statues, his legacy living on in books, documentaries, songs, and even "Finding Everett Ruess" maps. He is the notable namesake of the annual Escalante Arts Festival/Everett Ruess Days, which celebrates the life and works of the enigmatic young artist-poet-wanderer.  Read more here.

Speculation about Ruess' fate includes living a clandestine life on a Navajo reservation, falling off a cliff, drowning in a flash flood, and murder. Although a Navajo elder claimed to have seen Ruess murdered by two Utes, the remains discovered in a grave site on Comb Ridge were ultimately determined by DNA testing not to belong to Everett Ruess.

Some say his life was cut short with dreams unfulfilled. But this prophetic quote by Ruess when he was just 17 years old suggests he lived and died exactly the way he envisioned: "I must pack my short life full of interesting events and creative activity...I intend to do everything possible to broaden my experiences and allow myself to reach the fullest development. Then, before physical deterioration obtrudes, I shall go on some last wilderness trip to a place I have known and loved. I shall not return."