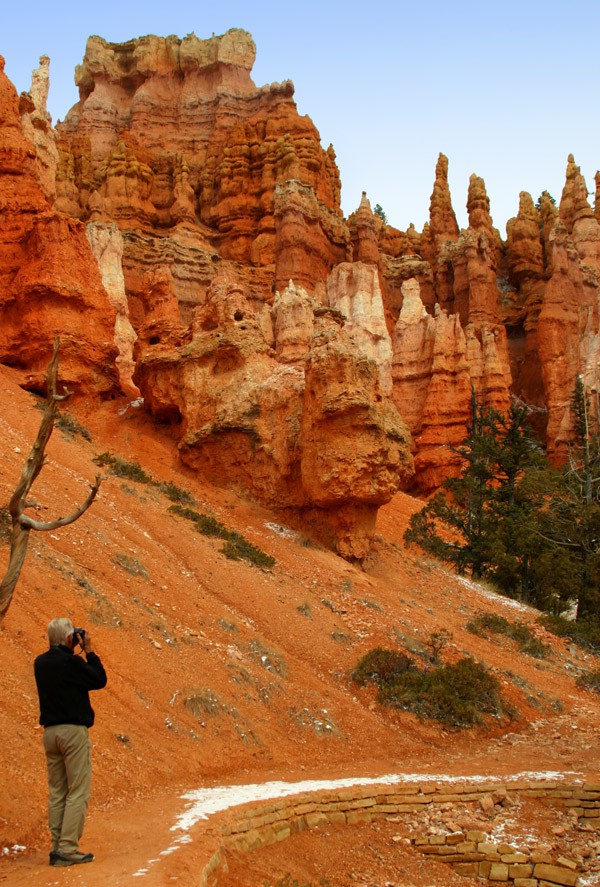 Bryce Canyon is, without a doubt, America's most exceptional and distinctive national park. Carved into the eastern edge of the Paunsaugunt Plateau, the forces of nature are striking in Byrce Canyon National Park, as the landscape explodes with enigmatic hoodoos, fins, arches, and spires carved over millennia by wind and water erosion. Bryce amphitheater, the largest here in America's most unique national park, spans six miles and is filled with a massive audience of mysterious red rock hoodoos of all shapes and sizes. Astonishing views await at every turn, rich in contrast of red rock to brilliant blue sky. Sunrises and sunset are simply breathtaking as the sunlight and shadows dance over the rock formations throughout the day. Bryce Canyon National Park is part of the Pink Cliffs, the geologically youngest layer of the Grand Staircase, which reveals sedimentary layers of history in subtle shades of pink, red, orange, white and gray that add color and contrast to the impressive landscape. 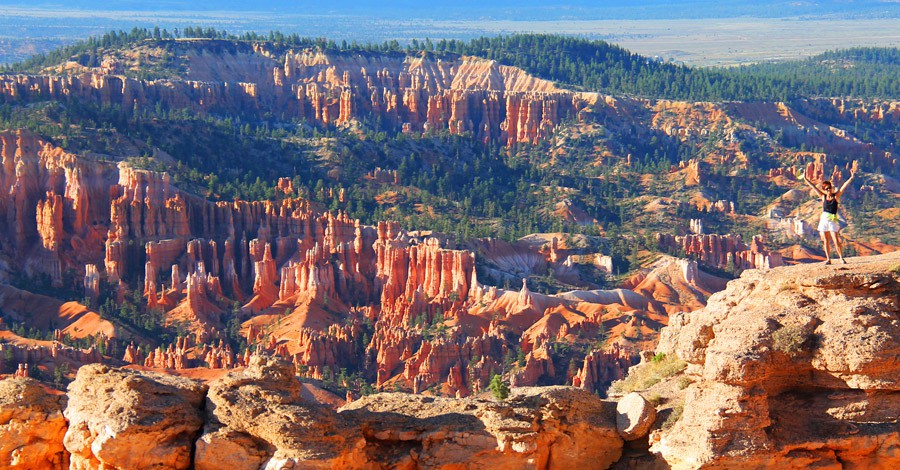 The most astonishing feature of Bryce Canyon are the literally thousands of hoodoos that fill the amphitheaters, rising from the canyon floor and shimmering under the early morning sunlight or softly glowing as the sun sets. Bryce Canyon's tallest hoodoo is Thor's Hammer, which stands massively at attention and can be best viewed from Sunset Point or via the Navajo Loop Trail. Whether you view the fiery red and orange pinnacles from the rim or descend into the amphitheater and walk in silence among them, the experience is breathtaking. There are several trails to choose from, ranging from easy and paved to adventurous backcountry, through hoodoos highlighted by ancient bristlecone pine trees. 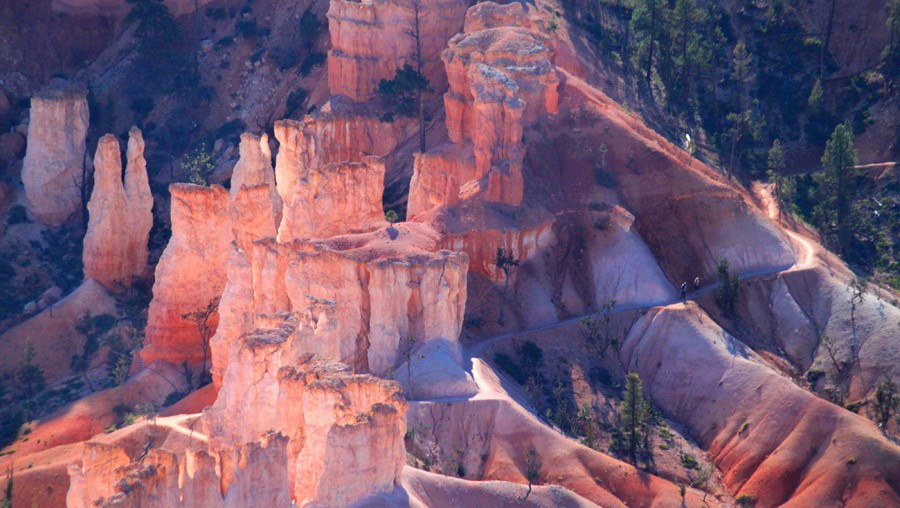 A scenic drive through the park takes you to overlooks with views as far as the eye can see, increasing in elevation from around 8,000 feet at the visitor center to the peak elevation of 9,115 feet at Rainbow Point. The 18-mile scenic rim drive follows the Paunsaugunt Plateau, with expansive and dramatic views of the Paria Valley and variegated cliffs of the Grand Staircase. There are more than a dozen overlooks. Sunrise, Sunset, Inspiration Point, and Bryce Point offers some of the most dramatic views imaginable, especially as the sun illuminates Bryce Amphitheater. Natural Bridge is a massive natural stone arch 85 feet wide and 115 feet high. From the Rainbow Point peak, the Bristlecone Trail leads through 1,600-year-old pines to open, sweeping views of the Aquarius Plateau, which is the highest in North America, Bryce Amphitheater, the Henry Mountains, and the Grand Staircase. Views stretch for up to 100 miles here at this unique national park. Be sure to make a side trip to Fairyland Point near the park entrance for panoramic views of the Table Cliffs and the Kaibab Plateau. 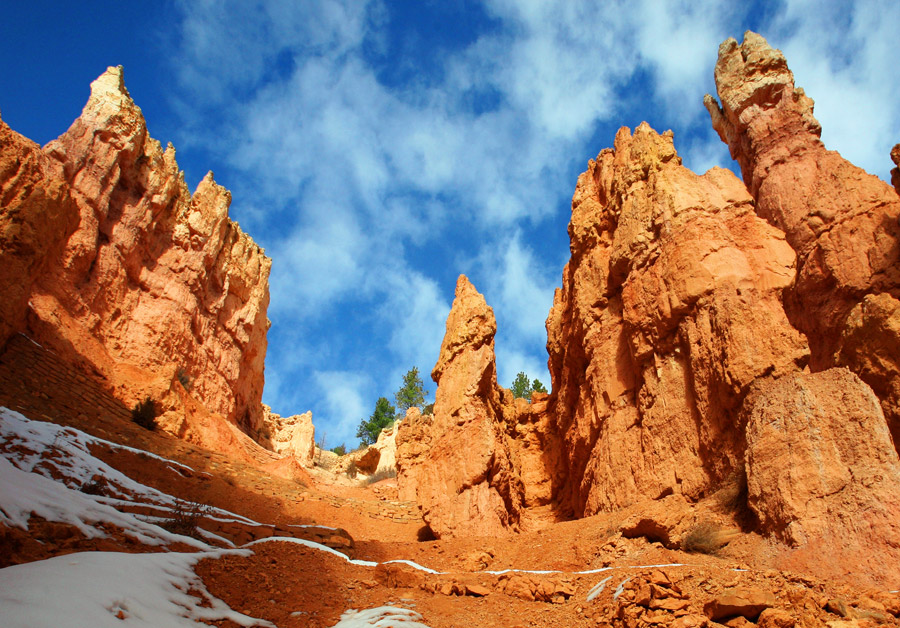 Gazing up at the Hoodoo formations within Bryce Canyon

Bryce Canyon National Park's wind- and water-sculpted rock formations stand at attention, recalling the legend of the ancient Paiute Indians who believed the hoodoos were evil Legend People frozen in time. And while the oddly shaped pillars can be found throughout the world, Bryce Canyon's landscape is almost completely—and uniquely—dominated by hoodoos and expansive views. It is almost as if Mother Nature was determined to impress—and she did. Two million annual visitors to American's most unique national park can surely attest to that.  Read more about Bryce Canyon here. 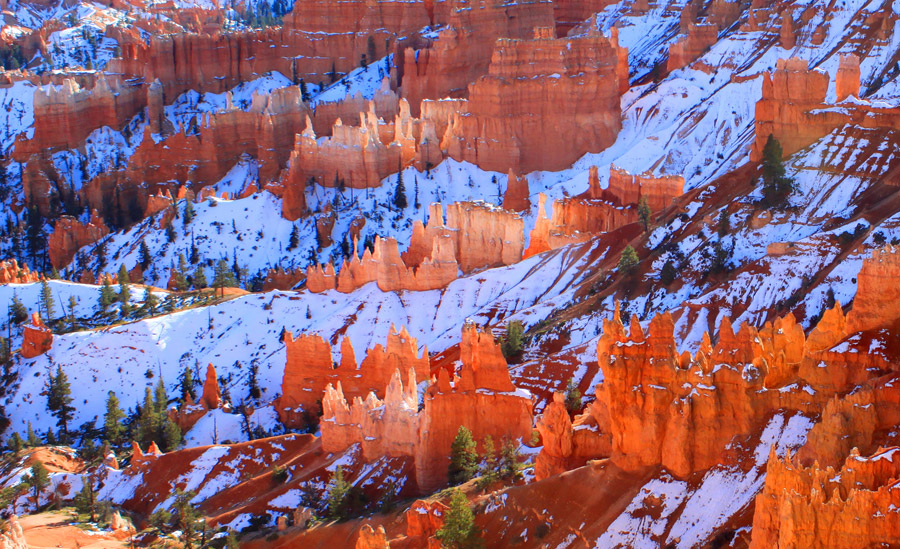 Snow frosting on the hoodoo formations in Bryce Canyon
Author